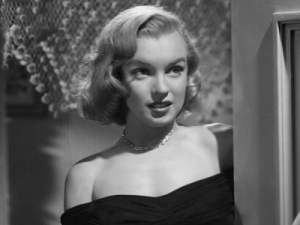 There is probably little that is left unsaid about this movie out there in Internet land but tonight, I watched this amazing movie for the first time in years and I feel compelled to add my warble to the singing choirs of critics, both professional and perhaps armchair like myself.

The Asphalt Jungle is considered to be a classic of the genre of Film Noir and I do not disagree.

So what does Noir mean to me? It certainly means many things to many people.

Firstly, the aesthetics are the bait to a syberite of the senses like myself. The shabby glamour. The suits whose creases slowly succumb to crumple and crimson during the course of the story; party dresses that the dames forgot to change out off at the end of the night before, incongruous with the morning sun.

Black and white. Shadow and light.

This a dualism incarnate. It’s a world where there is only good and evil. It’s land where we see its people scrabble around, flailing their legs and arms to better themselves with a quick ill-gotten buck obtained courtesy of Mssrs Colt, Smith or Wesson, only to be slowly but surely swept down the vortex of fate.

Noir is a world where there was no golden age. How oftendo people of a certain age fall into the reverie of returning to a post World War Two world, a world of no crime, narcotics, terrorism and where children obeyed their parents (Mom and Pop naturally) and front doors were strangers to lock and key.

A world where everyone was sure of their place and their purpose.

I guess all epochs need their Garden of Eden allegory. Humanity needs a narrative that tells of a time we lived in a land of milk and honey and through  greed, envy or stupidity, was banished, cast from Paradise to wander in the darkness ever since, trying to find and recapture our lost idyll in the unlikliest of cornerswhatever that we may find ourselves in. The Paradise Lost, Eden narrative is perhaps the  raison d’etre, the driving force behind our species.

Howeve, Noir shows us that no such Eden ever existed. Murder, rape, robbery, cheating and the whole gamut of human frailty is as well represented in whatever era of history we care to mention. The only difference is, technological advancements in communications and media spred light into the shadows of ignorance and more is exposed and exhibited to the world.

The past was a place were its dark secrets were swept under the carpet.

The Asphalt Jungle was made in 1950, just before the Eisenhower Presidency. The dawn of modernity as we know it today. America was on the cusp of unparalleled prosperty and political and military power in the world yet why was this era such fertile ground for such a genre?

Well, it may have been 1950 but as we know, social decades do not start on January 1st of a year ending in zero.  America was still basquing  in the dark afterglow of Hiroshima, Nagasaki, World  War Two. Even the Great Depression, was only less than two decades ago at the time and its scars were very much visible and felt on the psyche of the nation. 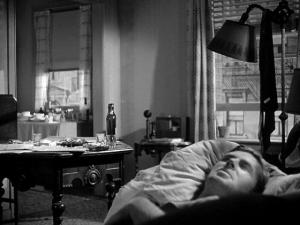 Stylistically, The Asphalt Jungle belongs to the 1940’s, or even the last 1930’s. We meet a very young ingenue, Marilyn Monroe whose name does not feature on the opening credits. She plays the mistress of a sugar daddy, the seemingly wealthy big-shot lawyer Lon Emmerich whose lavish lifestyle indirectly sets the scene for his downfall. It’s a story of a heist that goes wrong. The story is well documented in other sites, notably Wikipedia but one aspect of the storyline which seems to be largely overlooked is that of one of the central characters Dix Handley (played by Sterling Hayden).

Dix plays a displaced farmboy from Kentucky whose family lost everything, their land, their farm and each other as a result of the Depression. He finds himself in the city, alone, dispossessed and disconnected. We already see the allegory of a  lost idyll. Dix even speaks nostalgically about this at the very start.

Within the context of the Judeo-Christian tradition, this puts me in mind of the story of the fallen angels who rebelled against God  and were cast forever from Heaven to spend eternity in the darkness, in a world which would never know the touch of the light of love again. Ditto for Adam and Eve cast from Eden. Many cultures and traditions have similar legends and tales. 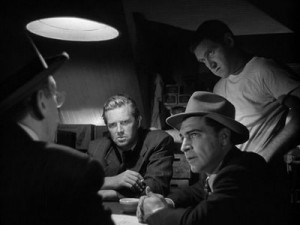 Dix is in his version of Hell and dreams of making enough money to buy back the farm his father lost all those years ago. He is mortally wounded during the course of the heist but by hook and by crook, manages to drive the whole ten hours all the way from the city to the farm of his childhood, with the money to buy it back in his pocket.

But a rapidly expiring Dix collapses in the field and dies without ever fulfilling his dream.

Ok, he catches one final glimpse of his Heaven but he never had a chance to enter it. This is the ultimate message of the genre : whatever your Heaven is, you will never get there. You may think you will and you may even come as close to its gates but humanity has ain in-built self-destruct button and we just clutch defeat from the jaws of victory in the end.

Will Noir return as a force in mainsteam cinema? Perhaps not stylistically but in spirit, only if social, economic and political planets align in that form once again.