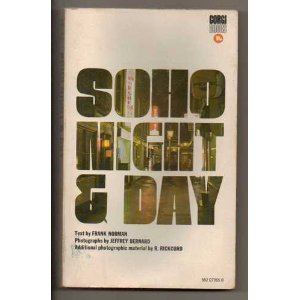 “At the time I was fourteen years of age and the war had just ended, and I was let loose on the world. I must own that every single word my worthy headmaster had to say has turned out to be God’s honest truth. Loose women can indeed get you into a lot of trouble and drink can destroy you both mentally and physically and as for gambling it is a curse that can end you in the poorhouse. However there was one thing my headmaster did not tell me that is the best place in the world in the world to find these things is Soho – that I found out for myself”

This book is not a crime novel or a true crime book but rather a gravelly love letter to Soho, London. About 40 or 50 so real life vignettes written by Frank Norman, detailing both the history of the once notorious streets of Soho (Old Compton, Dean, Brewer, Greek, Poland, Berwick, Wardour, Romilly) and the stories of the larger than life characters who once graced its streets, restaurants, clip joints, alley ways, bars and clubs like old neon bulbs which once lit up a once upon night but whose names are largely forgotten or have entered urban folklore.

We are talking about its restaurateurs, its residents (yes, it’s hard to imagine but ordinary people once lived in Soho and some still do but they’re a rarefied breed), its artists, its waiters, its barmen, its fruit and veg men, its window cleaners, its pop stars and wanna-be popstars, all milling around, rubbing shoulders within one another within this very small community which punched well above its cultural weight, in the central London in the mid 1960’s.

Frank Norman (1930-1980) was a playwright and novelist whose most well known works are Banana Boy, Bang To Rights (an autobiography of his time in prison), and the troika of Soho based detective novels Too Many Cooks Spoil the Caper, The Dead Butler Caper and The Baskerville Caper which featured the worn, weary and ever-so-slightly dilapidated and bleary private detective Ed Nelson. He also wrote the musical Fings Ain’t Wot They Used To Be

Born in Bristol, he was abandoned as a child and spent his formative years being passed from foster home to foster home including Barnados like a human parcel. He ran away to London when he left school and quickly got caught up in a Fagin-like world of shady dealings and crookery for which he spent a short spell in prison. However, he had a talent for writing and within a year of his release, he had published in Encounter magazine a 10,000 word extract from his prison memoir. Championed at first by the editor of the Magazine Stephen Spender, and subsequently by Raymond Chandler who wrote the foreword to Bang to Rights,

Soho Night and Day is generously interspersed with black and white photographs taken by that famous doyen and journalist Jeffrey Bernard (1932-1997) who once wrote the legendary Lowlife column for the Spectator magazine; a column where his drinking exploits and encounters with the famous and infamous would be exotically and languidly brought to life in an equal measure of lucidity and humour, mostly dark. These largely took place within the triumvirate of the Coach and Horses, the Colony Rooms and The French Pub aka Yorkminster. It was perhaps not entirely unexpected that Mr Bernard did not always meet his deadlines and there were several occasions when the space where his column should have appeared was printed with the notice

Jeffrey Bernard is Unwell which later became the title of a play by the late Keith Waterhouse, depicting the life and times of Mr Bernard.

The photographs like the real life histories and vignettes, document the Soho of time, warts and all. This is not another Carnaby Street celebration of the cool and hip. We have a generous helping of long forgotten shop fronts, butchers, newsagents, cafes, drapers, record stores, as well as every-day street scenes of residents, shoppers, office workers and of course, some of the many colourful characters who all weaved their own personal, magical thread into the ever changing and ever luxuriant tapestry that Soho was and still is to this very day.

Some of the restaurants still exist. The Gay Hussar and Quo Vadis are still going strong as are the clubs such as The Colony Rooms once owned and managed by Muriel Belcher who was both balm of troubled minds and de facto agony aunt and redoubtable verbal piranha for those who crossed the line. To give a taste, a little window into this bygone character of that bygone world:

‘Shut your mouth Mary and buy a round of drinks!!’ She shrieks at a rather effeminate young man wearing an art-noveau tie, who is involved in a screaming row with a masculine-looking woman with a butch hair-cut. The row is over nothing more serious than the price of rhubarb.

Frank Norman and Jeffrey Bernard were old school Soho doyens, part of a cadre of bohemians which are now largely and sadly passed on. Had Soho been a television opera, these two gentlemen would have assumed the mantle of ‘Best Loved Characters’.

But Soho was and is and always will be a soap opera, endlessly depicted, analysed, emulated but never recreated.

This book is sadly out of print but I came across it while researching the works of Frank Norman and I was lucky to find an affordable copy on eBay. If you’re a fan or aficionado of the London or Soho of recent yore, I can suggest no finer or beautifully written or depicted book.

Today, I came across a wonderful second-hand/used book stall in Soho, London and found a few rare and reasonably priced gems. One of them, a 1959 Soho-based memoir Stand On Meby Frank Norman not only is a treasure but it contained one of the most delightful bookmarks I have ever come across.

It was an tiny folded-up entertainment newsletter for Eastbay, San Francisco for the week of April 10-16th 1952!!

Above is the front cover and below are a few more of the details of shows, movies, singers, cabarets and plays, some long faded from the public mind but some that have mounted the plinth of immortality. 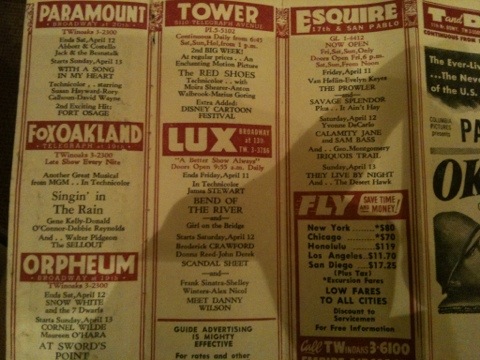 So the 1950’s were a time of innocence and wholesomeness, right?

Well hats off to the eternal verities of life and how fitting I came across this in the once notorious Dean Street. They say Soho isn’t what it used to be but isn’t that said of anywhere at any time?

As for Ginger Britton – I wonder what became of her.

Her name has long faded into obscurity like some of the other artistes in this bijou little programe but today, in this little corner of Blogland, she once again takes to the stage in the minds of those who read this article.

And in our own little way, Ginger is once again a star.